The 8BitDo Pro 2 enhances an already outstanding controller with additional features like customizable rear paddles, increased grip, and an easier method to swap between custom settings on the fly. The most significant change is compatibility with the new Ultimate Software app for smartphones, which allows almost anybody to customize their controller with remarkable ease right out of the box.

While the majority of gamers will be satisfied with a normal built-in controller, those that take their gaming seriously, or even compete professionally, need a little more from their gamepads. This usually includes spending a lot of money on high-end, customizable pro-grade controllers. The new 8BitDo Pro 2 Wireless Controller for Xbox, on the other hand, offers a lot of the same features at a considerably lower price.

This wired version for Xbox consoles is a terrific option for cash-strapped gamers who wish to take greater control over their in-game performance, owing to some outstanding customization possibilities. It takes its cues from the similarly superb 8BitDo Pro 2 controller. Also, you can see the best PC controller

The lower latency of a connected connection might be a good factor for pro gamers since its wired nature naturally makes it more inexpensive than its wireless competitors. In contrast to pro-grade controllers with equal features, such as the $160 / £160 Xbox Elite Controller Series 2. 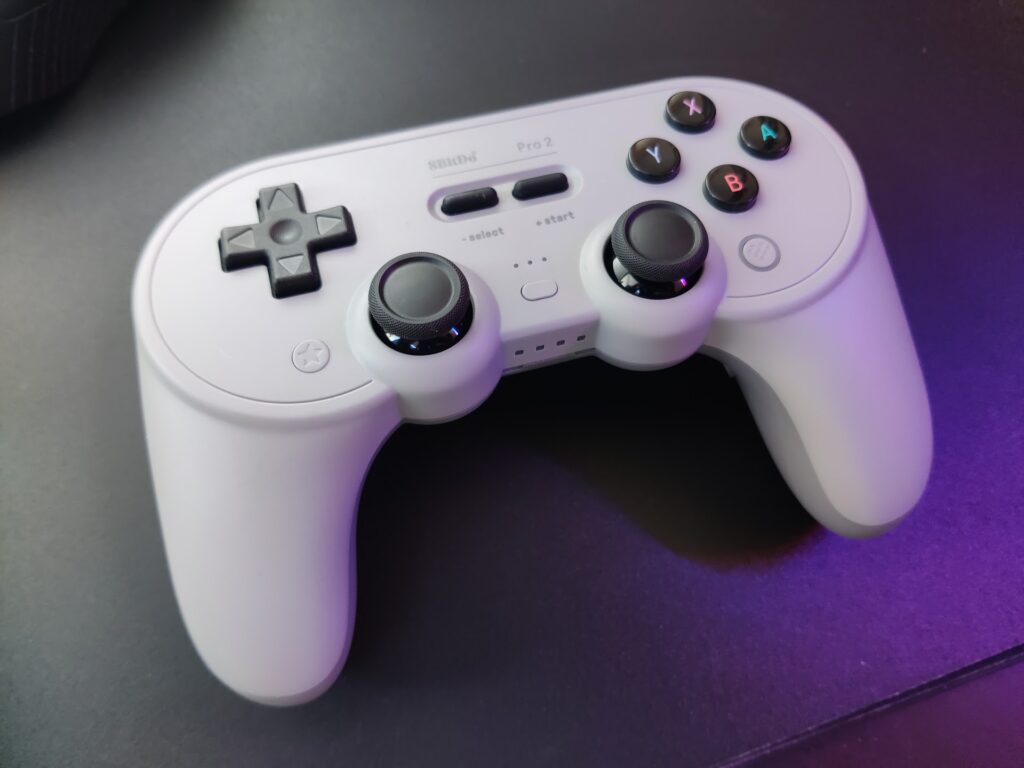 The 8BitDo Pro 2 is modelled on the SNES controller and offers a nostalgic feel, but with current features such as two analogue sticks, vibration, and more. The controller’s ergonomics are great, making it a delight to use. It’s close in size and weight to the DualShock 4 controller from PlayStation, with the Pro 2 weighing only 18 gram more. Even the “enhanced grip” on the back of both controllers feels the same.The 8BitDo’s stems are a little straighter, but the DualShock 4’s extend at a larger angle.

The Nintendo Switch, Windows PCs, Mac OS X laptops, Android smartphones and tablets, and the Raspberry Pi are all compatible with the Pro 2. Bluetooth 4.0 is available on all compatible devices, as well as a wired alternative if desired. 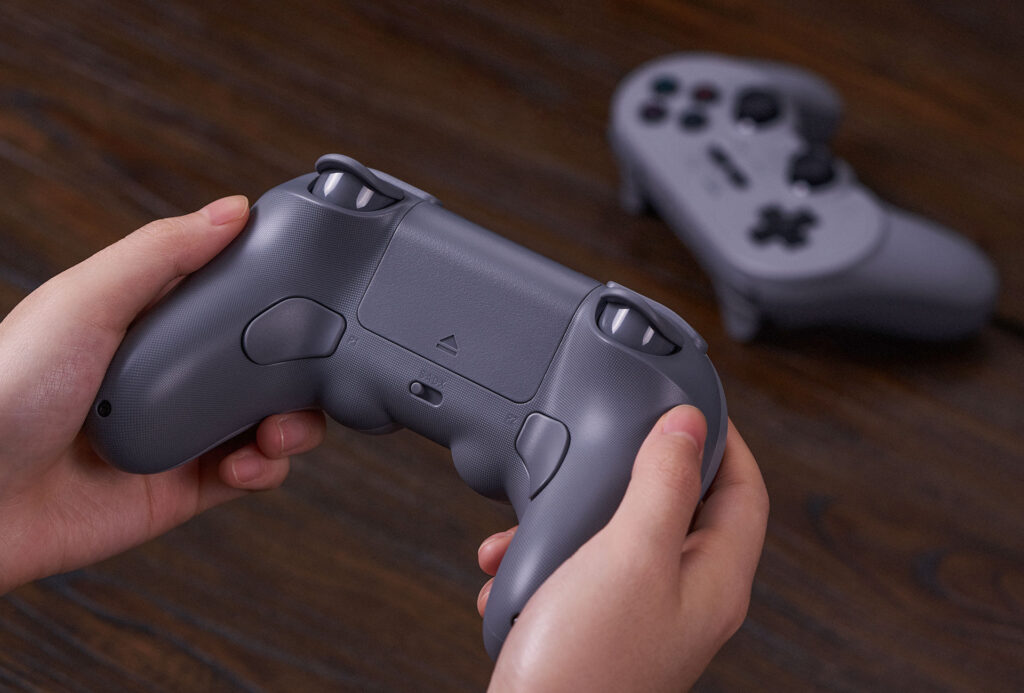 8BitDo has nearly perfected the current D-pad, reproducing the best version of the SNES controller while maintaining the same size, shape, and feel. When pushed, the four face buttons opposite the D-pad generate a satisfying click. They are little larger than the buttons on recent controllers like the DualShock, DualSense, and Xbox Series X/S, but the point at which the button registers a push is similar.

The analogue sticks are slightly wider than those on the DualShock 4 and are located underneath the pill-shaped Start and Select buttons. The sticks themselves are sturdy but delicate, snapping back to their original position almost instantly. Both have a distinctive click and a comfortable thumb groove when pressed in. 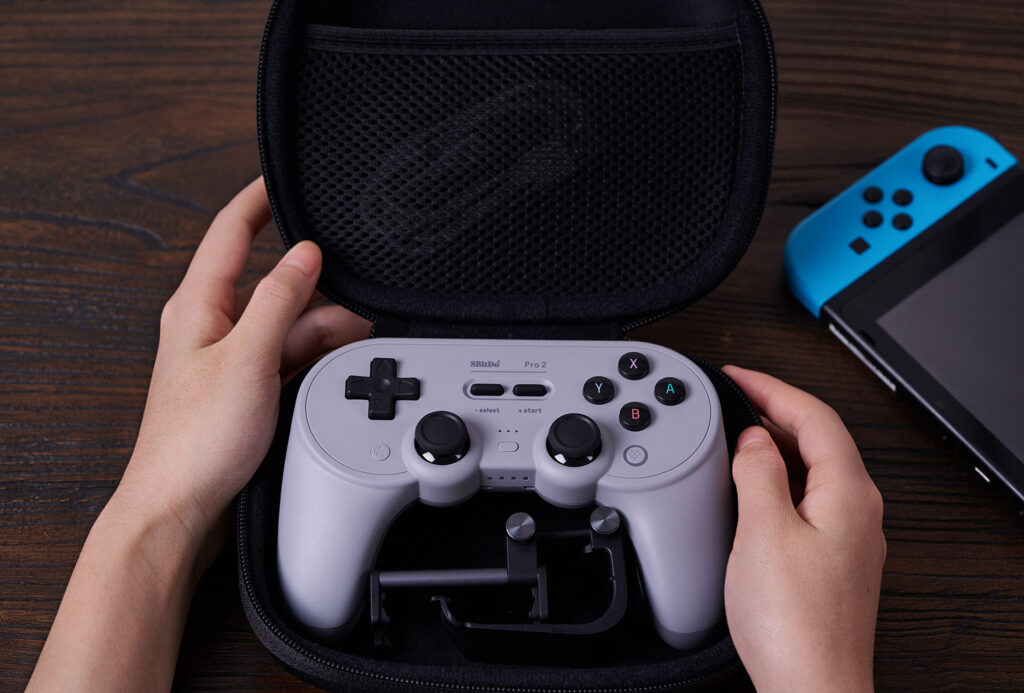 The L and R buttons on top are also comparable to those seen on a SNES controller. Both buttons are long, thin, and simple to push since they curve with the controller. The L2 and R2 buttons on the rear are excellent. They’re simple to press down, although they’re a little tight. For games that support it, they are analog triggers, which means they can tell how far they’ve been pressed.

The Star and Heart buttons, which are exclusive to 8BitDo, are placed on the front of the controller, on opposite sides. These buttons are used as the screenshot and home buttons on the Nintendo Switch, however they may be used for anything on any platform. There’s also a button in the center that lets you easily choose between three customizable preset profiles.

Two “pro” back paddle buttons are located on the back of the device. When pressed, these low-profile buttons generate an audible click and are nestled gently into the natural curvature of the grips. This is one of the Pro 2’s new capabilities, and it’s a great touch for people who want to fine-tune their inputs. A simple toggle button on the rear lets you choose from four different devices to connect to Switch: macOS, Android, and Windows. This is a significant improvement over prior 8BitDo controllers, which required simultaneously depressing the Start and one of the face buttons to change the associated device.

A battery door stores 8BitDo’s replaceable 1000mAh lithium-ion battery pack, allowing you to change it without having to buy a new controller if necessary. The controller’s battery lasts around 20 hours on a single charge and can be recharged in about four hours using the USB-C connector on top. Wired modes allow you to play and charge at the same time; however, the included USB-C cable is just around three feet long, so you’ll probably want to get another.

8Bitdo’s Ultimate Software for Windows is a free download that provides your Pro 2 the same amount of customization as an Xbox Elite Wireless Controller. Customization requires a connected connection, but once the controller is synced, the modifications are available remotely.

To begin, any of the digital buttons (excluding Start and Select) may be remapped to any other input. You may change the sensitivity of the analog sticks and analog triggers, define dead zones, and even switch the sticks or the direction pad with each other (you can also swap the triggers with each other). Only Windows mode allows you to change the trigger sensitivity, but Switch mode allows you to change the stick sensitivity and swap the triggers. The left and right vibration motors on the controller may also be adjusted in intensity.

You may also use the software to create macros, which are which was before button sequences that can be assigned to any of the digital buttons. You may customize the macros’ timing, including inserting particular pauses between inputs.

The 8Bitdo Ultimate Software allows you to customize the SN30 Pro+ in a variety of ways (though without the programmable P1 and P2 buttons, of course). Another feature of the Pro 2 is the ability to create several profiles. By pressing the Profile button between the analog sticks, you may store your modifications to one of three controller profiles. This allows you to create unique layouts for individual games or save a “clean” profile for when you don’t require any macros or remapped inputs. Because each system mode has its own set of profiles, you may retain distinct profiles for your Switch games and your PC games. 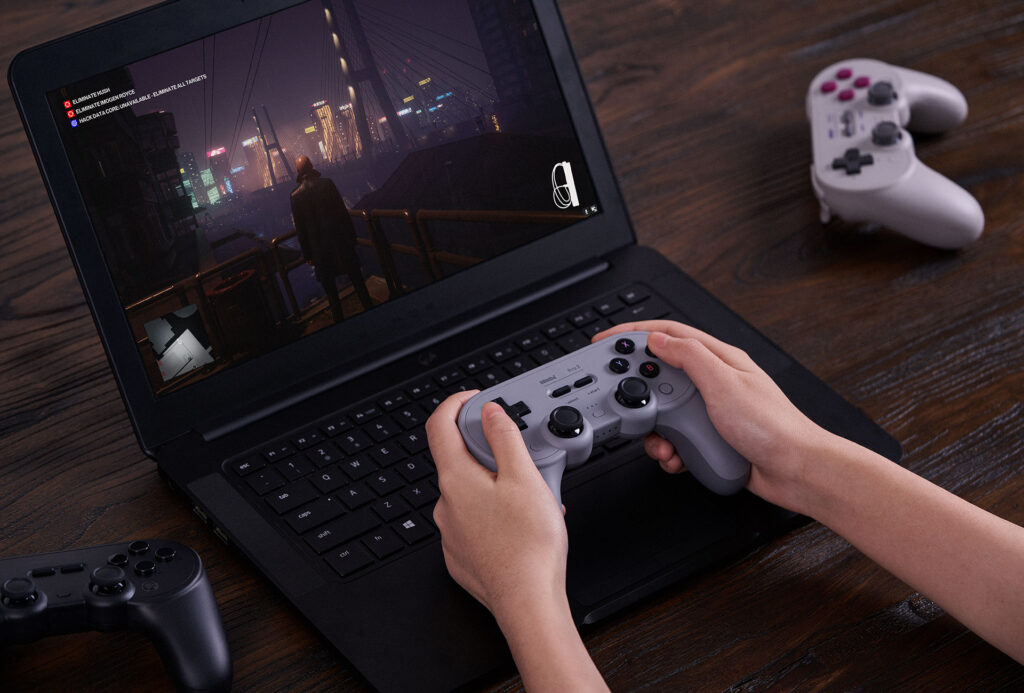 I put the Pro 2 through its paces on a Windows 10 PC and a Nintendo Switch, and it performed admirably on both. When I moved between the two systems, it quickly paired and rejoined. I had no trouble setting the controller for both modes with the 8Bitdo Ultimate Software.

On my PC, I played Shovel Knight, and the Pro 2 functioned well with the game. Both the direction pad and the face buttons felt great and responded quickly to my movements. The direction pad was very good, consistently striking all directions without causing unintended direction shifts (a slight problem my Switch Pro Controller has if my thumb tilts slightly when I press the down direction).

I also used the Pro 2 to play a lot of Monster Hunter Rise, and it worked great. The analog sticks were as sensitive as the direction pad, with a strong motion that matched the Switch Pro Controller. The bumpers and triggers worked just as well as the buttons, and while I didn’t need them, I loved being able to adjust the sensitivity curves of the triggers (though a physical trigger stops like on the Xbox Elite Wireless Controller would have been a nice addition).

By hitting the P1 and P2 buttons, I was able to trigger my silkbind attack and switch axe special move, respectively, using minor macros of A+X and ZL+X. Because the command is merely a double button push, the A+X macro for my switch axe’s elemental strike worked well. Silk bound attacks, on the other hand, require holding the ZL trigger down and then hitting X or A; if both are pushed at the same time, the attack will fail. Unfortunately, I was unable to create a macro that holds down one button and then presses another while the first is still held down after a little pause. It’s a very specialized case, however its bad macro programming doesn’t allow for greater flexibility.

Regardless of whose system you use it with, the Pro 2 is a joy to use. It’s a little lighter and has narrower grips than the Switch Pro Controller, but it’s still pretty sturdy and fits well in my large hands. All of the controls are pleasant and sturdy beneath the thumb, with a good, springy response.

There are several controllers to choose from, but it all boils down to a few factors. To begin, what is the size of your device (are you using the Z Fold 2)? Do you also require a phone mount clip? Third, do you intend to use it with your Switch?

Because it’s a more compact controller, something like the GameSir X2 Bluetooth would be ideal for most people. It also has a telescoping design that doesn’t require any form of phone mount. However, the software is a touch strange and has its quirks.

The Razer Kishi, which has long been regarded as the best gaming controller for Android, is another excellent telescopic alternative. Not that there’s anything wrong with the controller, but you won’t be able to use it with a bigger device like the Samsung Galaxy Z Fold 2. However, with the 8Bitdo Pro 2, you wouldn’t be able to utilize a phone clip with the Z Fold 2.

The SN30 Pro is another 8Bitdo controller that is still widely regarded as one of the best. This controller is virtually a carbon copy of the original SNES controller from back in the day. Despite having the same buttons and superb D-Pad as the 8Bitdo Pro 2, it isn’t quite as ergonomic.

All of the hardware improvements give the Pro 2 a significant advance over the SN30 Pro+, which was previously one of my favorite controllers. Especially on the PC, where the controller may be used via USB and the Ultimate Software can rapidly configure setups. Regardless of price, the Pro 2 is one of the best controllers on the market. The fact that it only costs $50 and offers so much is the cherry on the cake.

Buy a controller that is compatible with all of your devices, including the Nintendo Switch. You can quickly configure the 8Bitdo Pro 2 right from your phone, so you can re-program buttons before starting your next gaming session. Amazing Xbox Gaming Controller.

Best VR Headset in 2022 – Which Headset should you buy?

Ps5 issues: So far, all PlayStation 5 issues and solutions have...