The OnePlus 10 and OnePlus 10 Pro may not be as well-known as Apple’s or Samsung’s next phones, but phone enthusiasts are anticipating their arrival with eager expectation.

There are a few factors that make this OnePlus launch particularly exciting. The OnePlus 10 cameras are the biggest worry from a hardware standpoint. After a year of working with Hasselblad, last year’s software improvements was amazed us, but will Hasselblad have a hardware impact on the OnePlus 10? The Pixel 6 and Pixel 6 Pro are the source of the OnePlus 10’s another burning question, which is its price. Google’s flagship Pixel price shocked everyone, and OnePlus may struggle to stay up.

While there have been no official announcements about the OnePlus 10 or OnePlus 10 Pro, there have been enough leaks that we can have a reasonable sense of what to expect from phone and let’s see what are the OnePlusPro, Rumors, Release Date, Price, Specs, News, and Leaks. Also, you can see Sony Xperia Pro-I Review: With 1-inch Image Camera Sensor

Specifications of One Plus Pro

The Snapdragon 8 Gen 1 is said to be 20% quicker and 30% more energy efficient than the Snapdragon 888 found inside the OnePlus 9. Gaming and AI performance are also likely to improve.

Memory is likely to be available in 8GB and 12GB capacities. The storage options are likely to be 128GB and 256GB.

A recent leak has revealed some of the specifications of the OnePlus 10 Pro, most notably the display. A 6.7-inch QHD+ 120Hz display is expected on the phone.

Following that leak, Pete Lau revealed on Weibo, China’s social media platform, that the OnePlus 10 Pro will have a new LTPO 2.0 display. Following in the footsteps of the OnePlus 9 Pro’s LTPO panel, which can dynamically scale from a rapid 120Hz to 1Hz when a fast refresh rate isn’t required, LTPO 2.0 will also provide a smoother display.

It’s unclear how this would work in reality, but Lau claims that LTPO 2.0 will enable a new level of smoothness. Nonetheless, this might be a benefit to fast-action mobile game gamers, as well as those wishing to use the Nvidia GeForce RTX 3070 cloud-based game streaming platform.

Over the previous several years, OnePlus has progressively pushed up the release date for its flagship phones, making it more difficult to predict now than in the past. Last year, the OnePlus 9 was released on March 23, while the OnePlus 8 was released on April 14 the year before.

Max Jambor, a prolific leaker, has joined in, claiming that his sources lead to a OnePlus 10 announcement on January 5, 2022, at CES. While OnePlus has invited the press to an event on that day at CES, it’s not unheard of for a business to just show off its existing product selection at the show, so it doesn’t necessarily mean anything.

The OnePlus 10 was believed to be launching in China long before its worldwide launch, which gives some credence to this rumor. If that’s the case, an early January debut in China would follow these steps to a global launch in mid-March. However, this is only a rumor, so it’s a bit of a puzzle piece.

Another interesting piece to this puzzle is that the Galaxy S21 FE is also expected to launch at CES 2022. It would be the biggest pair of phone launches at CES in years if both of these smartphones were to arrive there.

There are currently no serious rumors about the cost of the OnePlus 10 and OnePlus 10 Pro, and as I indicated at the opening, this is a significant concern for both phones that may make or break their success.

Given the pricing competition from Google and even Samsung’s FE line, it seems realistic to anticipate the OnePlus 10 and OnePlus 10 Pro to drop significantly from there to stay competitive. This is assuming that they don’t get a significant hardware update, which would certainly constrain their hands and require them to either hold the line or raise pricing. 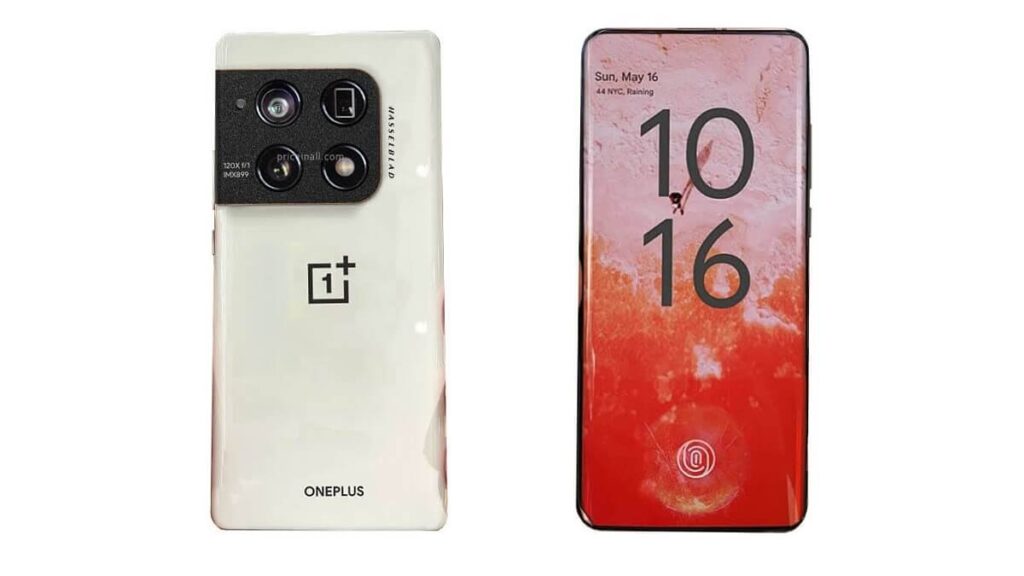 Thanks to a series of leaked renderings and fake units, the design of the OnePlus 10 has been seen. Although the back camera array isn’t a complete revamp, it is a significant improvement over last year.

The OnePlus 10 Pro was the subject of all of the renderings and fake units. Given that OnePlus usually sticks to the same design for both versions, it’s safe to assume that this year will be no different. The phone has a waterfall display on the front, with a hole-punch camera in the upper-left corner. The OnePlus 10 is expected to have a flat display instead.

The most noticeable change looks to be the rear camera array, which follows in the footsteps of the Galaxy S21’s Contour Cut camera housing by wrapping directly from the back to the phone’s edge.

There are a few significant variances, such as the fact that it is nearly square and joins just on the side, rather than the top and side.

The OnePlus 10 Pro rumors for cameras are the phone appears to have four separate lenses in the renderings and fake units. We’ll dive into the camera’s specs later, but that’s the same as the OnePlus 9 Pro’s count. Presumably, at least one of those lenses will be removed from the OnePlus 10, but one may likely be replaced with a less expensive alternative like a specialized macro or black-and-white lens.

It would be good to see OnePlus develop its own design identity, but if these design leaks are accurate, I believe it is an upgrade over the previous design, even if it is a little Samsung-inspired. 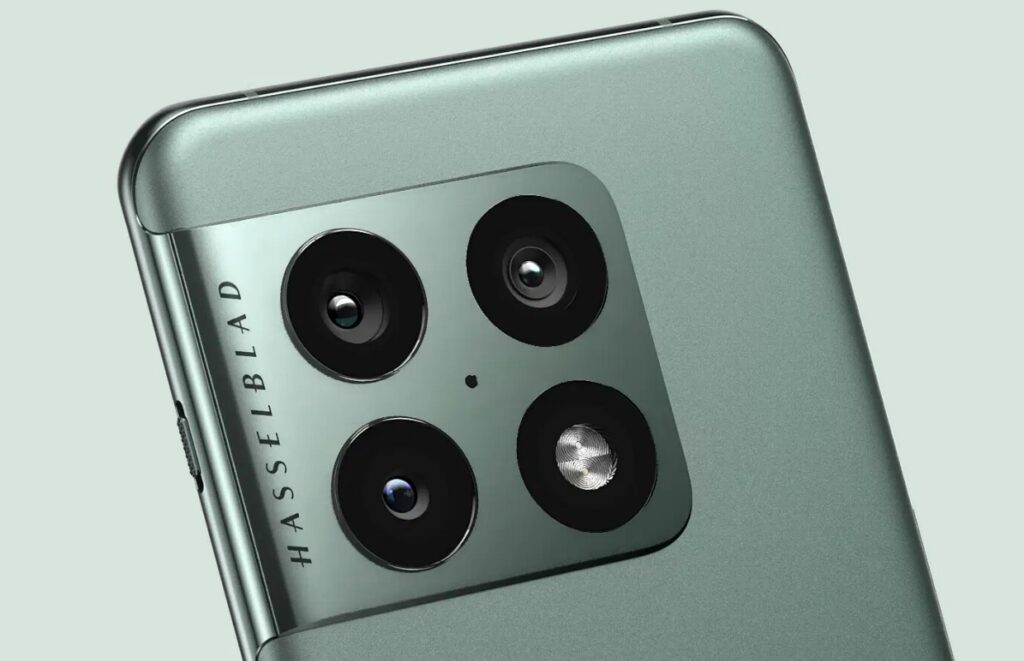 We haven’t heard much about the camera system on the OnePlus 10 Pro yet, but based on past phones, we can make some educated estimates about what to expect.

The key thing we know is that, like the OnePlus 9 series, the phone will most likely come with Hasselblad cameras. The two businesses have agreed to work together for three years on camera software, color tuning, and sensor calibration.

Since the OnePlus 9 was the first phone to integrate Hasselblad cameras, and both companies have declared the longevity of their cooperation, the OnePlus 10 and even the OnePlus 11 are very guaranteed to follow suit. Then what? Who knows what will happen. However, we won’t know what occurs until 2024.

We don’t know what those lenses will be because OnePlus has been inconsistent, but we can expect wide and ultrawide angle lenses on both phones. On the Pro, there might be a telephoto lens with optical zoom.

LetsGoDigital’s renders depict a OnePlus 10 Pro with a circular camera module and somewhat huge camera lenses. However, it’s unclear what these images are based on, and the OnePlus 10 that goes on the market will almost certainly not look like this.

The newest camera scoop comes from a Weibo article, which says the OnePlus 10 Pro will have a 5x optical zoom range, which will be superior to the 3.3x zoom of its predecessor. That would enable it to compete with the iPhone 13 Pro in terms of zooming. We’d take this with a grain of salt because the reports are a little hazy, but an additional zoom range for OnePlus phones would be welcome and appear to be a smart update.

According to a recent report, the OnePlus 10 Pro will include a 32MP front-facing camera with a hole-punch cutout on the left side. According to the leaker, the phone will sport a 48MP primary camera, a 50MP ultrawide camera, and an 8MP telephoto camera with 3x optical zoom on the back.

To be considered for a position on our best camera phones list, OnePlus will need to put in a lot of effort on the image signal processing and computational photography fronts.

Because of the company’s deeper partnership with sibling brand Oppo, the OnePlus 10 Pro will be a significant change for the OnePlus portfolio. Both companies want to merge their Android, Oxygen OS, and Color OS operating systems into a single, unified smartphone operating system.

When the new operating system is released, OnePlus CEO Pete Lau announced that the OnePlus 10 Pro would be the first OnePlus smartphone to run it. It was also revealed that users of older OnePlus devices, including the OnePlus 8, will be able to upgrade at some point.

“By pooling our software resources to work on a single, enhanced operating system for both OnePlus and Oppo smartphones throughout the world,” Lau explained. We’ll integrate the best elements of both OS into one even more powerful OS: OxygenOS’ quick and smooth, burden-free experience, and ColorOS’ reliability and extensive functionality. Long-time OnePlus supporters will be relieved to learn that the still-unnamed OS will preserve the same clean, near-stock Android experience as OxygenOS.

According to a new rumor, the OnePlus 10 Pro would support 125W charging, nearly tripling the existing OnePlus phones’ 65W charging.

Charring speeds would be improved, but charging time would not be cut in half. Because as power rises, so does electrical resistance, there comes a point where the benefits potentially decline.

However, the OnePlus 10 series is predicted to have faster-charging speeds. We’ll have to wait and see if they make a real-world improvement.

What we are Expecting to See in OnePus Pro

OnePlus, although making significant improvements in camera performance with the OnePlus 9 series, continues to trail behind Apple and Google. We’re hoping that the OnePlus 10 Pro maintains this pace and makes equally substantial improvements in post-snap image processing.

OnePlus is no exception to the trend of flagship phones becoming increasingly costly. However, the firm has always had more to offer at cheaper prices, and we hope that trend continues. Yes, the iPhone 13 Pro costs $999, but that doesn’t imply the OnePlus 10 Pro must cost the same.

OnePlus has a history of fluffing its cameras with an additional lens that doesn’t do anything, whether it’s a macro lens, a monochrome lens, or something equally as meaningless. It’s even worse when a truly useful telephoto lens is sacrificed in the process. We only hope the OnePlus 10 doesn’t make the same mistake.

If you look at the color selections for the OnePlus 9 series or most of the company’s smartphones in general, you’ll see black, white, and perhaps a light blue. Nothing is intriguing about it.

Sure, bright phones are known to sell badly in comparison to dull-colored phones, but in a world where most smartphones appear almost identical, marketers will have to turn to color to stand out sooner or later.

Subham Mehta - January 13, 2022 2
Check out the rumors about the 2022 iPhone SE release date, pricing, features, and specifications. The iPhone SE 3 may have a bigger screen and a newer processor. Read the full news….

How to Take a Screenshot on a Laptop

Laptops to buy under $500: is it worth purchasing?