The JBL Charge 5 is a development of a successful concept. The Charge speakers are recognized for their balanced sound, strong volume, and long battery life, and the fifth generation is no exception. The Charge 5, on the other hand, improves on almost every element of what made the Charge 4 exceptional, making it an easy recommendation for consumers seeking huge, balanced sound with all-day battery life.

JBL has a long history of producing excellent Bluetooth speakers, with the Charge range standing out for its affordability. In the past, the Charge series’ sound was quite amazing considering its size. The Charge speakers’ battery life has always been remarkable, allowing consumers to utilize them as a power bank is a necessity.

In terms of functionality, the JBL Charge 5 is very simple when compared to the JBL Pulse 4 – which offers customers a personalized light display – but JBL has steadily increased sound quality and loudness while still maintaining all-day battery life in its fifth generation.

Since the JBL Charge 2, we’ve heard every Charge speaker, and it’s been fascinating to see the series progress from a bass monster to something more balanced and mature.

In conclusion, the JBL Charge 5 makes just minor modifications, but when you combine these with the speaker’s history as a rock-solid portable Bluetooth speaker, you’ve got a legitimate candidate for one of the best Bluetooth speakers available. Also, you can see the best headphones for workout

The JBL Charge 5 has a suggested retail price of $179.95 and being a new product, you won’t be able to get it for any less. JBL offers it directly, but you can also get it from Amazon, B&H, or Best Buy.

It’s also worth noting that there are a variety of color schemes to choose from. There’s also a camouflaged variant, in addition to basic colors like black, red, teal, grey, and the blue version we got.

From Charge 4, the Charge 5 received a considerable makeover. The major difference is the JBL logo, which is now considerably larger, indicating that this speaker was designed by JBL.

JBL also changed the form and size of the speaker. It’s somewhat smaller and plumper in the middle than the Charge 4, measuring 8.7 x 3.8 x 3.7 inches. The passive bass radiators are placed in end caps that are carved at a little angle, similar to the JBL Flip 5. If you wish to stand the speaker on one end instead of laying it flat, this gives it a bit more visual flair, but it also causes it to lean like the Tower of Pisa.

Power, Bluetooth, and volume up/down buttons are located on the top. The play button may also be used to pause a track or progress to the next song with a double click. To distribute the music more broadly, the PartyBoost button connects two JBL speakers in stereo mode or many speakers in party mode.

There’s a USB-C port on the rear for charging the battery, as well as a USB-A port inside a rubber flap for charging other devices. In each version, JBL has preserved the Charge’s namesake characteristic. However, unlike previous versions, the Charge 5 does not contain a 3.5 mm auxiliary connector.

A single LED sits behind the huge JBL logo, indicating the remaining battery power. The light fades as the power declines, making it a slick-looking method to monitor how much battery life is left, though it’s not as accurate as of the Charge 4’s five LEDs.

With each generation, the Charge series has become more rugged. In addition to being waterproof, the Charge 5 is dust resistant, earning it an IP67 designation. That means you may submerge the speaker for up to half an hour in water up to 1 meter deep.

I dipped the Charge 5 in a sink full of water, and it continued to function normally. Light rain or shower jets will not be a problem at all.

The Charge 5 has the excellent sound quality for a speaker of its size, with clear voices and powerful bass. It has a more balanced sound than the Charge 4, but it lacks the fullness and breadth of our current Bluetooth speaker top selection, the UE Megaboom 3.

The horns on Black Pumas’ “Fire” were bright and powerful, and the vocals stood out over the guitar and synthesizers. The Weeknd’s “Blinding Lights” included ominous bass and thumping rhythms, yet they didn’t overpower his voice. On the Megaboom 3, though, both tracks sounded considerably deeper and richer, even if the vocals weren’t as far forward in the mix.

When listening to Fleetwood Mac’s “Never Going Back Again,” the contrast between the two speakers was more noticeable; while Lindsey Buckingham’s vocals were crisper on the Charge 5, the fingerpicked guitars on the Megaboom 3 were considerably fuller.

At maximum volume, the Charge 5 generated roughly 94 decibels, which is incredibly loud, but the music distorted severely. The distortion disappeared at a more realistic 85 dB, yet it was still loud enough to be heard over the sound of a party or traffic. 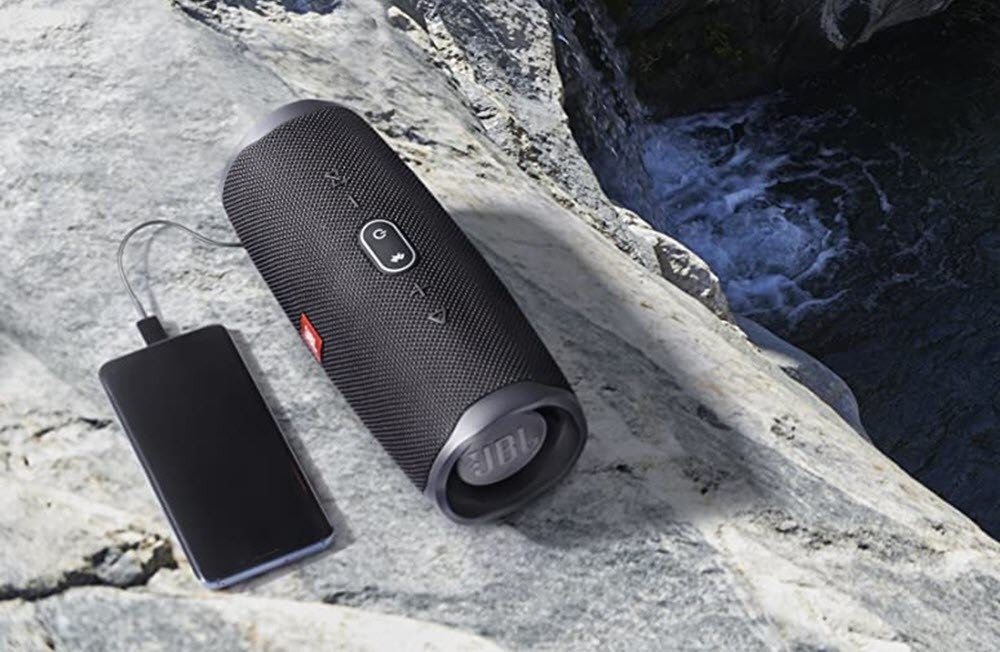 The Charge 5 will last 20 hours, according to JBL, which is the same as previous versions including the Megaboom 3. That appears to be correct; after 15 hours of primarily low-volume use, I had roughly 25% battery remaining.

Of course, the Charge series’ ability to operate as a power bank for your phone is a crucial feature, however this uses the same battery as the speaker itself. Expect a reduction in playtime if you use the Charge 5 to power other devices.

The JBL Charge 5 Bluetooth speaker is excellent. It doesn’t have many bells and whistles, other than the ability to charge another portable device, but it provides powerful voices and bass and is weatherproof.

Also, don’t forget about the Sonos Roam. Despite having Wi-Fi connection and voice assistant capabilities, this is also less expensive than the Charge 5.

Still, if you like JBL’s sound, want to use it as a power bank, or just like the way it looks, the Charge 5 is a good choice for a portable and waterproof Bluetooth speaker.

The JBL Charge 5 is one of the best Bluetooth speakers, but it isn’t one of the cheapest. It has a new appearance, a bit more ruggedness, and improved sound.

Best All-In-One Desktop Under 50000 to Buy in India

Best of CES 2022: All Tops New Gadgets of This Year

How to clear the cache on Xbox Series X